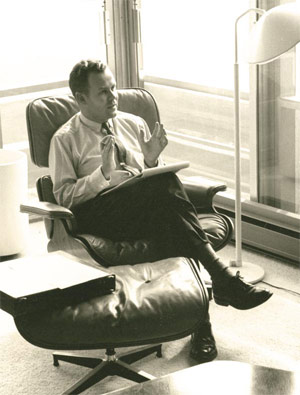 Charleston Fraser died in December 2002 at the age of 73 in an accident involving a chartered boat in the Turks and Caicos Islands, doing the two things in life he enjoyed most - sailing and exploring the possibilities of land development.

Over the years, Fraser and Sea Pines have had a tremendous impact on the lives of others, including family, friends and co-workers. All will tell you that he was a man of vision with an endless amount of energy. And most will also tell you that finances weren`t one of his strong suits. For all his strengths and weaknesses, one thing is sure: Fraser made a lasting impression on those with whom he came in contact."Who he was drew people to him," said Mary Wyman Stone Fraser, his wife. "Men especially were drawn to him. Charles was always very willing and interested in doing something new and welcomed new ideas. He was never frightened by others` intelligence."

Mike Lawrence, current president of Sea Pines Resort, related their first encounter. It was in 1989, when Lawrence was exploring business opportunities on the island. Lawrence and Fraser met for lunch at Cafe Europa. Soon they had spent the entire afternoon together talking. Afternoon turned to evening and Lawrence said he found himself aboard the Compass Rose, Charles`sailboat, for a cocktail cruise." I was first impressed by his creativity and overall persona," Lawrence said. "He`s incredibly interesting to talk to. He`s dynamic. I have to say, though, he didn`t always make sense. Some of his ideas were out there." Margaret Greer, a friend and neighbor since the early days, agreed. He was "multi-tasking" before it became the buzzword it is today. "Sometimes it seemed as if he was brainstorming with himself," she said. "He was a genius. You couldn`t crawl into that mind." Added Joseph B. Fraser Jr., Charles` older brother, "What a mind. He was one of a kind. There aren`t many people out there with his vision."

Fraser said he and his brother had a good working relationship with one another and that the older they got the closer they became. "What we had and what is taking place today (in Sea Pines) was his baby," he said. "The closer I got to him, the more I got caught up in it."

Fraser was a voracious reader and had a passion for history, especially the history of Sea Pines. He bought whatever he could get his hands on - books, maps, anything pertaining to Hilton Head Island. "He would have read in the shower if it (whatever he was reading) wouldn`t have gotten wet," Mary said.

As an ardent fan of history, Fraser was relentless when it came to preserving and conserving the environment. Part of the reason he developed such strict covenants was to see to it that the rich history of the area was preserved. "Sea Pines Resort sets us apart from others because of its history," Greer said. "Charles worshipped the importance of history." Incidentally, prior to the Fraser family`s acquisition of the land, a portion of Sea Pines property had changed hands several different times. It wasn`t until many years after Charles and Mary were married (the two wed on Nov. 30, 1963) that he stumbled across the fact that Mary`s ancestors, the Lawton family, had once owned the land circa pre-Civil War days.

Through the years, many tried to test Fraser`s knowledge of the history of the area and his quest to preserve it through its covenants. "People have tried, but they have failed," said Thomas Norby, chairman of the Sea Pines 50th Anniversary Committee, who got plugged into Sea Pines in 1965. He has, in one capacity or another, kept his ties with the company ever since. Mary said that about seven years after the first lots were sold, a family challenged one of 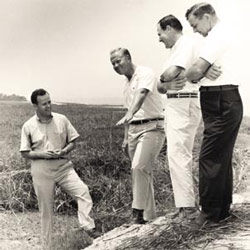 the covenants, something having to do with the color of the houses, she recalls."The Supreme Court of South Carolina ruled that land-use covenants could be applied," she said. Norby was a childhood
friend of the Fraser boys, who grew up in Hinesville, Ga., about a three-hour drive from Hilton Head Island. Norby got involved when Fraser`s mother, Pearl, said, "You have to come help the boys" Although busy with other business affairs, Norby said he knew better than to say no to Miss Pearl. "[Miss Pearl] painted a pretty picture of what Charles envisioned, and I knew enough that Sea Pines was a blossom waiting to bloom," Norby said.

Laura Lawton Fraser, Charles` youngest daughter, shared Miss Pearl`s perspective. "When I turned 27, thought about what I had done and then thought about what my father was doing at the same age," said Laura Lawton. "How outrageous and daring a person he was. How bold the concepts he came up with. He had the ability to take huge, disparate subject matter, synthesize it and then anticipate what the next wave was going to be."

More recently, since moving out of Sea Pines, Mary Greer said some her fondest memories were Fraser`s "pop-in" visits. "He wouldn`t knock; he`d just yell when he walked in the door," she recalled. Sometimes the visits would last as little as five minutes, and sometimes we didn`t even talk. Charles would grab the nearest book or magazine, and Walter (her husband) would continue working on his art project." Last year, Mary Greer wrote a three-part series on the history of Sea Pines, as told by Joseph Fraser, which appeared in the April, May and June 2005 issues of Hilton Head Monthly. Added Walter Greer, "He`s the only gentleman I ever met with a photographic memory. I saw evidence of it as he leafed through books in my studio."That`s another thing. Charles was very interested and supportive of the arts. And although he may not have taken part in them himself, he loved to see people enjoy things." For all of his hard work, Fraser did indulge in two pleasures: sailing and traveling. Mary Greer said she avoided sailing with him, however, if she could, because, "He ran aground a lot!" She notes there is one point in Calibogue Sound that affectionately has been nicknamed, "Charlie`s Bar & Grill" because he couldn`t seem to miss it. "About once a year, he would run aground," Laura Lawton said. "Then we`d just have to wait out the tide. For those who don`t have an appreciation for sailing, it would seem as if Dad was a bad sailor, but that wasn`t the case at all." Mike Lawrence conceded that Fraser sometimes had difficulty docking and that he once witnessed him make a ruckus while trying to dock the Compass Rose into the Harbour Town Yacht Basin in front of a crowd of about 200 onlookers. Lawrence just happened to be there for a Gregg Russell performance."Gregg made some

clever comment and everything went back to normal," he said.

As for traveling, Fraser`s approach was little different. On most trips, Mary and the girls, Wyman and Laura Lawton, would accompany him "We didn`t take the traditional family vacations," Laura Lawton said. "We`d visit seven different European countries in 10 days. We`d see the key elements of each place, and then he would press us about what makes that city great and what could be done to make it better. It was exhausting." For his visionary prowess, one thing Fraser was not well known for was his financial planning. "Money was never Charles` primary motivation, said his brother, Joe Fraser. "It was to create something he could be proud of that others could be proud of, too." Added Mary, "It`s not that he was naive about money. He certainly knew that he could make a lot of it. It`s just that he was not driven by money. For him, Sea Pines was more of an academic challenge." Speaking of academics, Laura Lawton said it was impossible for her father to make idle conversation."We`d sit down to the dinner table and Dad would engage us in whatever subject matter was at hand - history, architecture, advances in modern medicine. Half the time we didn`t care. We just wanted to be little girls," she said. "My father couldn`t do anything but academic conversation," Laura Lawton continued. "The only time I saw him relax was when he was reading or sailing. Even then, he`d invite 20 or so people to go sailing and hold court, discussing some topic or another." As an adult, Laura Lawton said her father`s passion for knowing all the facts is something she has inherited.

About three years ago, she started writing a book for pre-teens about stories in the Bible from the animals` point of view. About 100 pages into it, she stopped."I was unsatisfied with it because I didn`t have enough information," she explained. "I knew the story but not the whole context of the story. Now I have bookshelves lined with history books about the Roman Empire, the Greeks... so when I tell the story, they are correct politically, historically and culturally." Norby recalled that during his last year, Fraser invited him over and said "My clock`s ticking. You may be the only one to stick with this." In doing so, he entrusted Norby with several pieces of historical documents, photographs and archive material. Norby, who had been doing some collecting of his own over the years, said he gladly accepted the invitation.

Deprecated: Directive 'allow_url_include' is deprecated in Unknown on line 0